As an integrator of streaming solutions, we know it is very hard to find something for everyone and to stay within every budget. For this reason, Stream Dudes carries a variety of products and solutions to provide our clients. Switchblade Systems has been one of our regular “go-to” recommendations, as they produce a variety of solid, professional broadcast solutions at an unmatched value. But what about the new Switchblade M7 switcher?

Like “Goldilocks and the Three Bears,” the new M7 is slotted into the Switchblade lineup as the “just right” video production solution. If you review the marketing materials, Switchblade promises a portable, vMix-based, video production solution with a real GPU and real physical inputs…that also is affordable. The M7 is larger than the Splyce, more affordable than the Turbo (a GREAT portable system) and still smaller than the Rayzor. Can the M7 really be as good as the other Switchblade products? 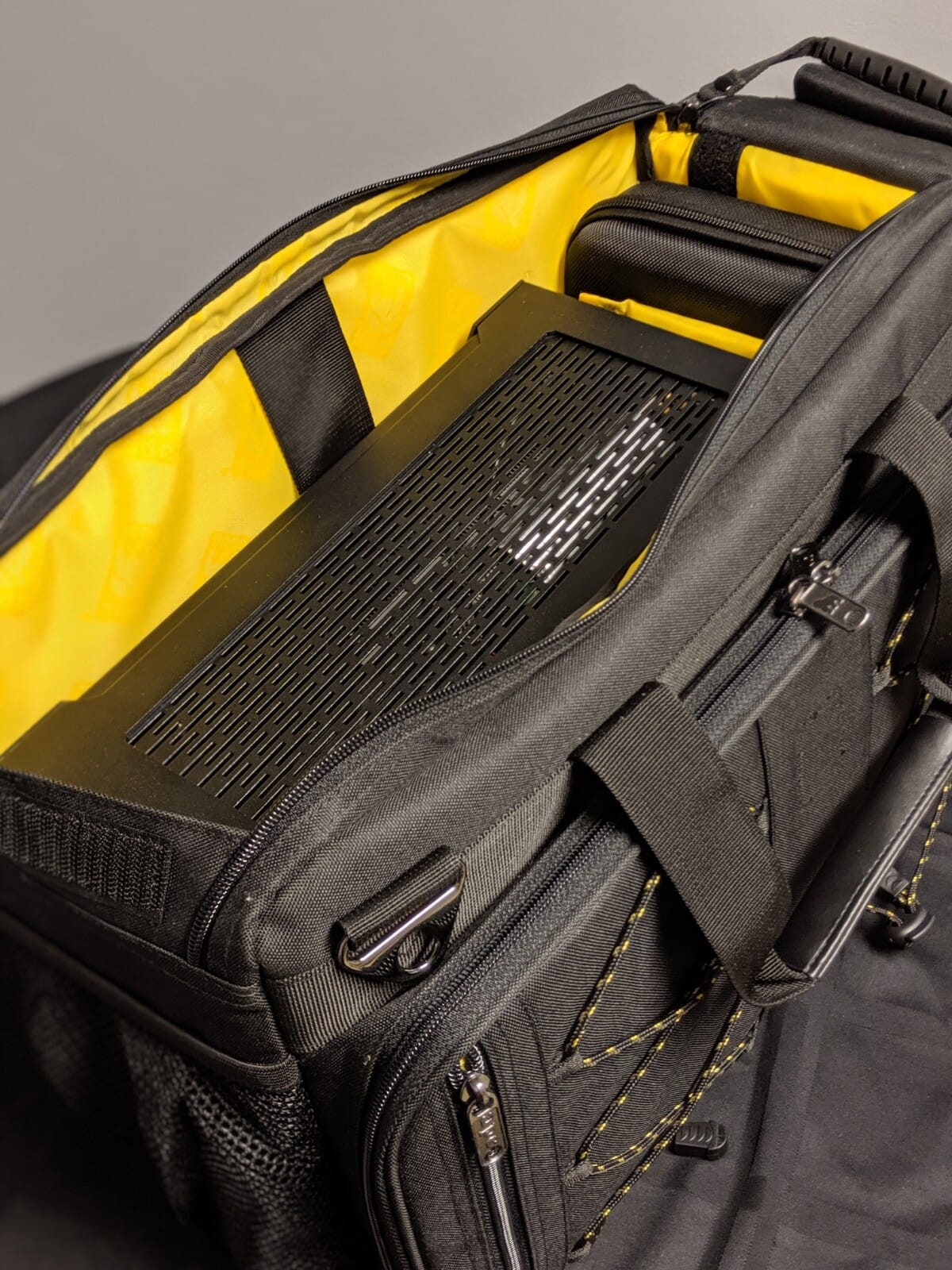 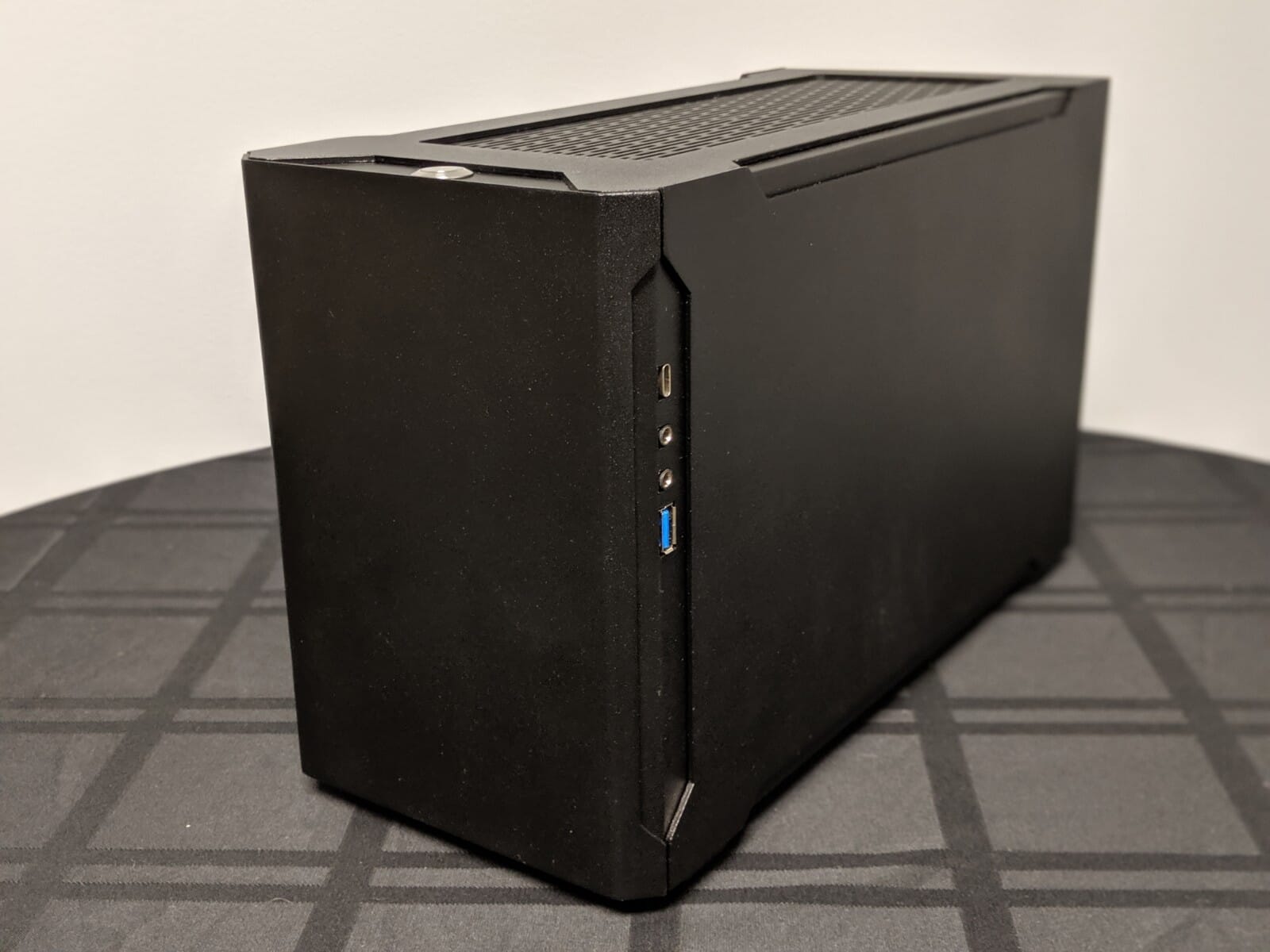 Nicely constructed and looks solid for its low starting price. 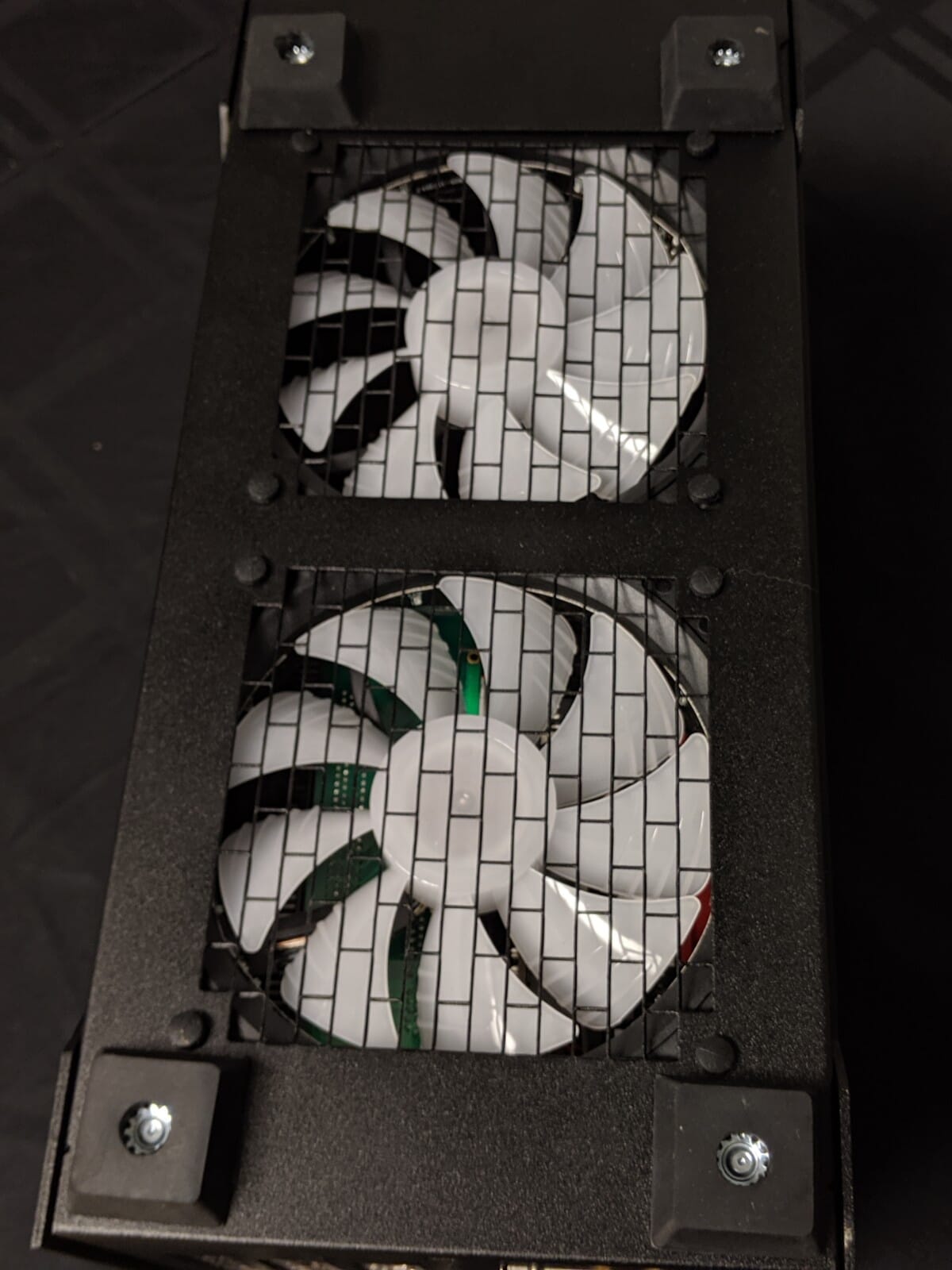 These fans provide more than adequate cooling for the high-powered GPU; A great feature not found on competitive products. 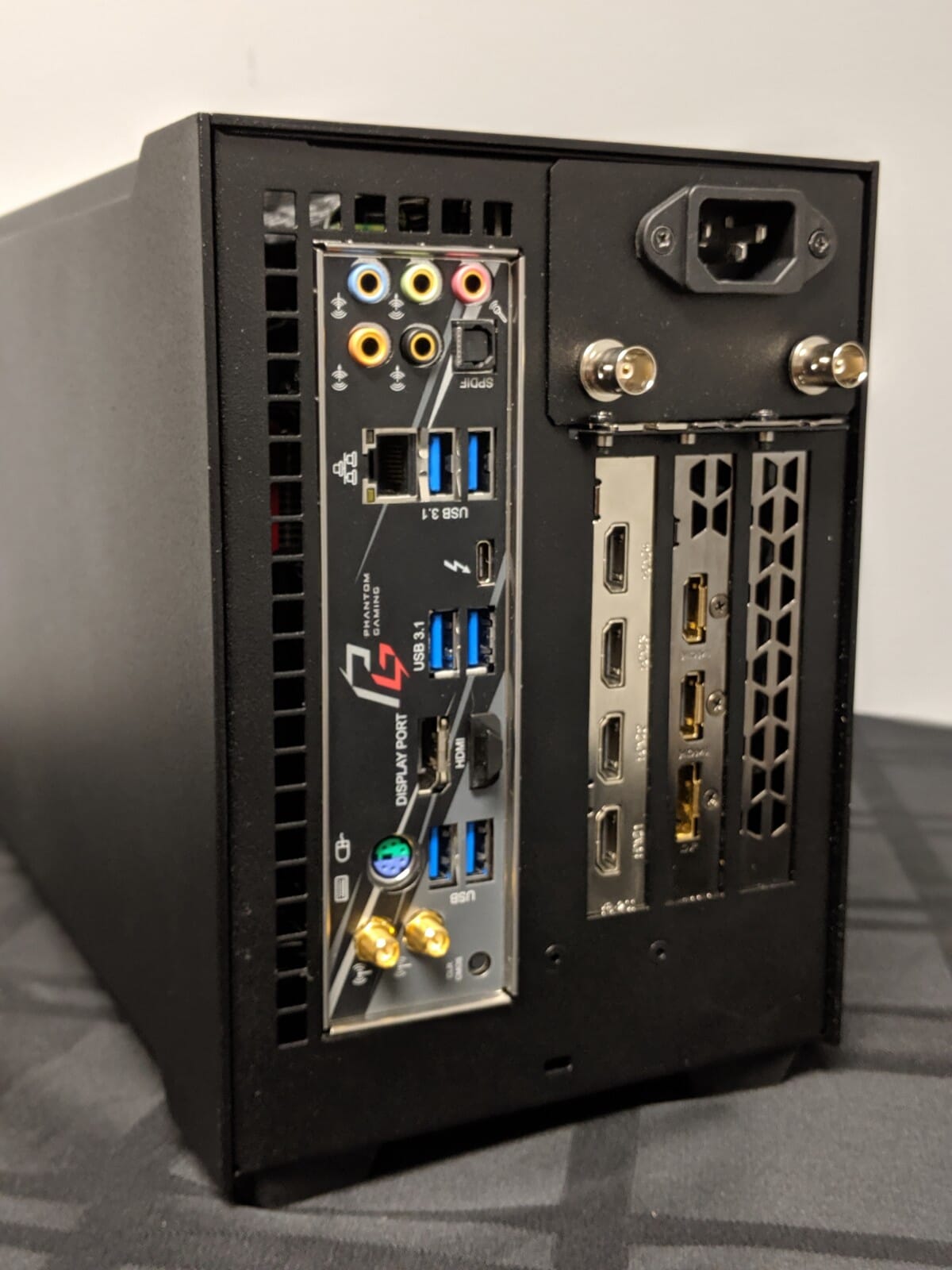 Optional configuration of (2) SDI and (4) HDMI inputs, giving producers a variety of options for connecting cameras and other video sources. 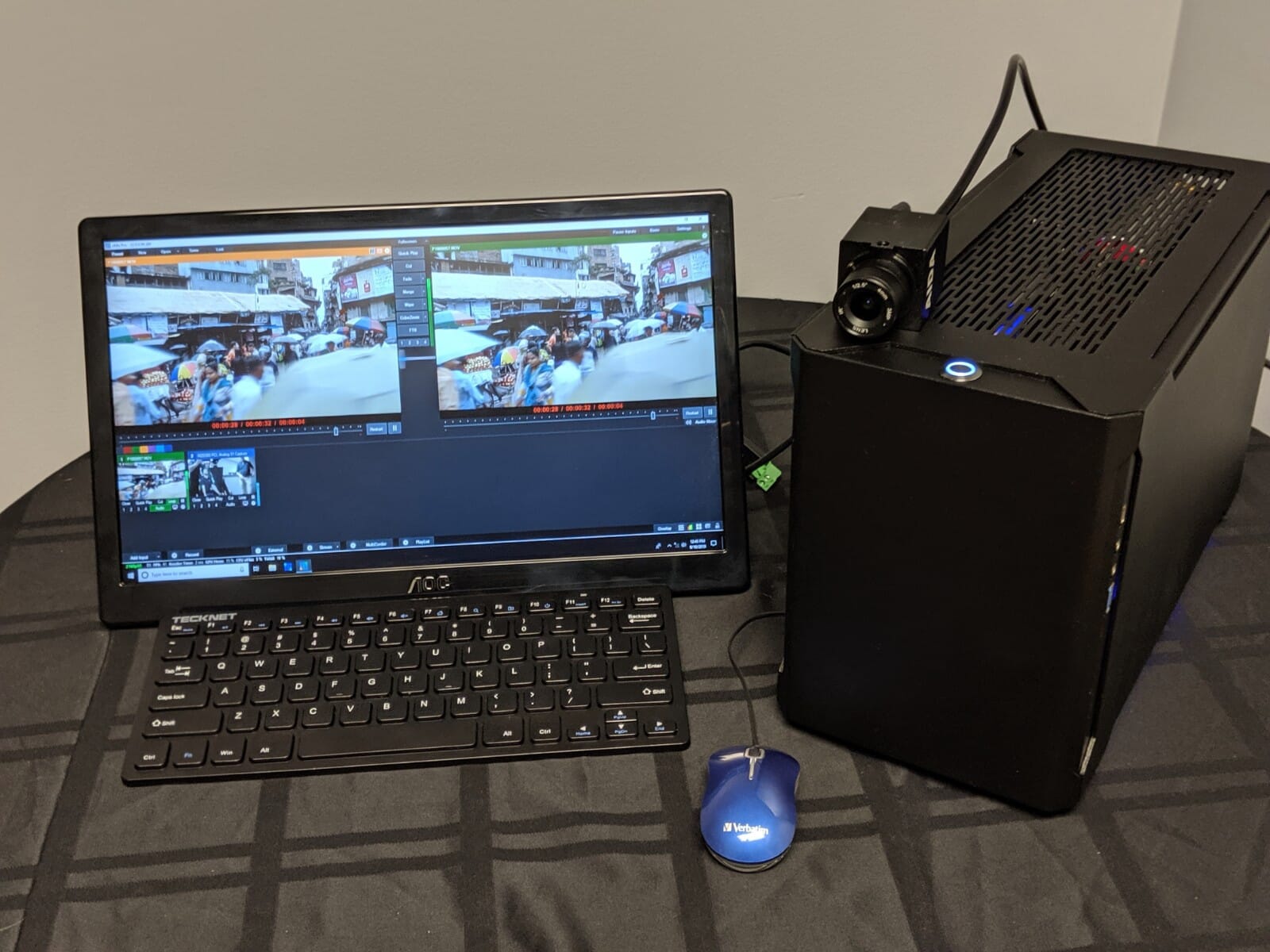 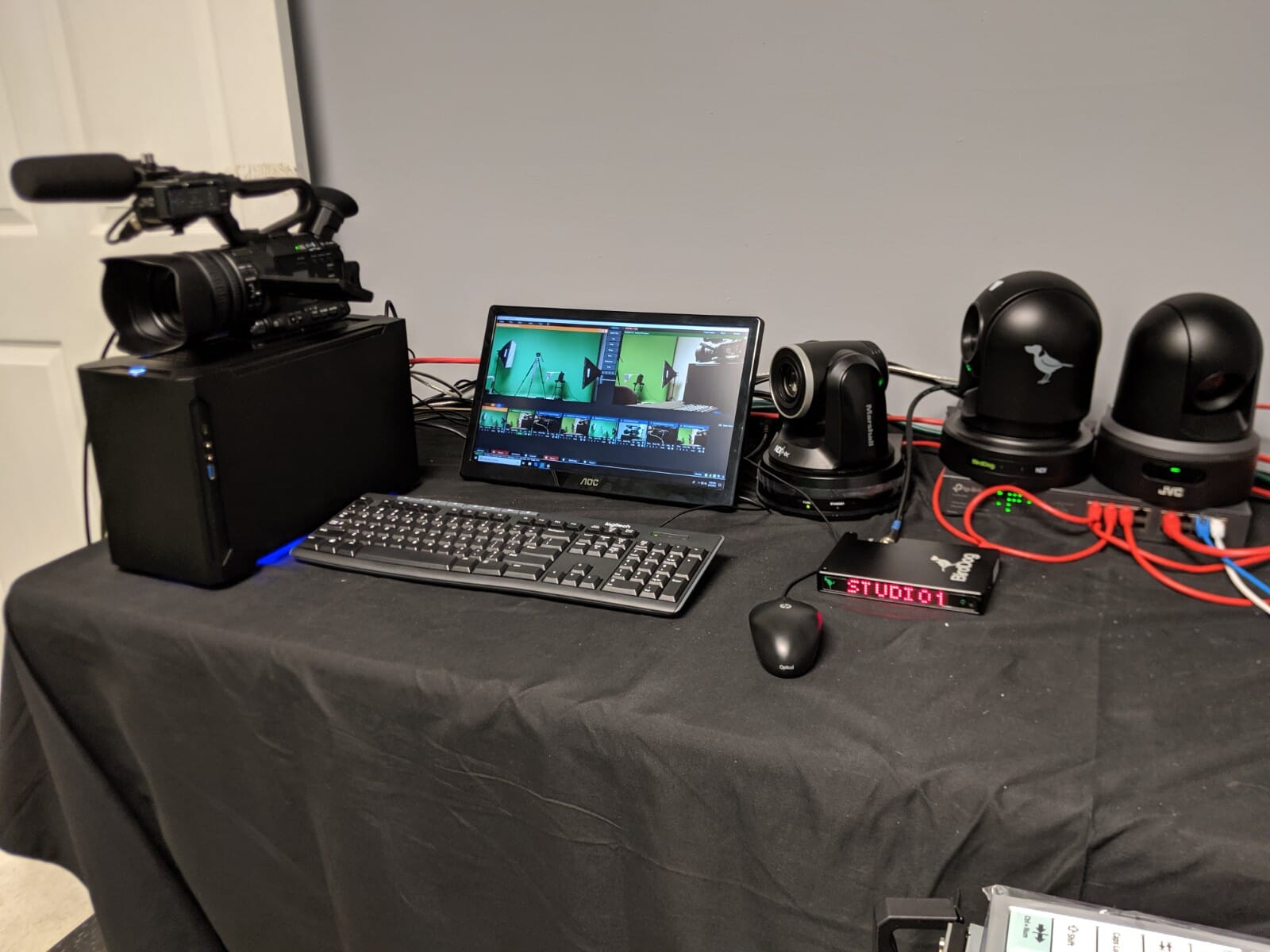 M7 as Powerful as it is Portable?

Switchblade claims that the M7 is as powerful as it is portable. We put that claim to the test by simultaneously ingesting (2) SDI, (4) HDMI, and (2) NDI sources.

When I first received our M7 evaluation unit, it came nicely packed into a medium-sized camera bag. Upon further inspection, the M7 wasn’t the only thing in the bag, there also was a USB-powered HD monitor tucked into the side panel, an AIDA Imaging HD-100 POV camera in the main compartment, and resting on top of the M7 was a compact keyboard and mouse. Most impressive to me was that you still had room to toss in a Skaarhoj Mini Fly control surface and a compact router, if so desired. To answer the question about portability: Yes, the M7 is highly portable.

Taking the M7 out of the bag was a bit of a surprise. My first impression of the M7 was that the chassis felt lightweight and somewhat delicate. Since this is a portable unit that is transported within another padded bag, this shouldn’t be an issue. Also having a lighter weight means it is easier to carry around and place under the seat on an aircraft.

The overall layout is clean, straightforward and intuitive, making for a simple setup. Power goes in; the monitor connects via USB 3.0; and cameras have a choice to be connected via HDMI, SDI or BOTH, in the case of this unit (Note: This layout is model dependent). This feature alone is worth its weight in gold and sets the pace for making this a functional system.

Usually you get what you pay for in the world of electronics; however, in the case of the Switchblade M7, it is just the opposite. Since the M7 is a scalable platform you only pay for what you need. With prices starting $2,995.00 USD for a Tier 1 version of the Switchblade, you get:

So where is the catch?

Luckily, there weren’t many obvious sacrifices made in order to hit that price-point. Most obvious was the lack of an M.2 SSD (Although we were told that M.2 would be standard in the production models) and a chassis that seems a bit light-duty for regular and consistent transportation on its own. A good carry case with ample foam padding easily can remedy this concern. Another point worth noting was that the desktop and startup screen seemed a bit generic for a complete solution. Again, this too could be overlooked so long as the system performs as claimed.

The system that showed up at our door was a Tier 1 model that featured:

Although we knew this was a Tier 1 system, we were still curious to see how it could handle multiple inputs, make a program recording, and stream live. (6) Physical, (2) NDI and (1) NDI|HX inputs later, we witnessed a form of magic.

Much to our surprise, the i5-powered M7 was averaging 63 percent total system usage (occasionally touching 75 percent) and hovering around a very respectable 22ms latency at 1080/30p. Even when adding an animated transition into vMix only marginally-effected the performance and the system ran well overall. To be fair, we were utilizing the hardware encoder options for both the main recorder (one MP4 @50MB) and the streaming encoder (one 720p 2.5Mbps stream to YouTube).

Considering that this Tier 1 system performed well in our tests; the M7 ran cool and seldomly felt underpowered; we like where Switchblade is heading with the M7. At a $2,995.00 USD starting point, Switchblade is cutting into the competition and offering broadcasters a solid, portable system that can grow with their needs. We would have liked to have seen a more rugged construction and perhaps an NVMe M.2 drive, but we understand that cost was a consideration in this product and honestly, these aren’t bad trade-offs.