The Power of a Broadcast Studio at Your Fingertips

JVC is an industry leader in IP video acquisition and it shows, with the JVC ProHD Studio lineup. The ProHD Studio 4000 and 4000S feature NDI technology for sending and receiving low-latency HD video via a network. When connected to any IP-enabled JVC camera (including the award-winning Connected Cam), full CCU controls are available. Additionally, when combined with KY-PZ100 PTZ cameras, full PTZ control with presets, and group movements also are available.

The JVC ProHD Studio fits into easily into a production truck. Similarly, it easily fits within a rack at a school or house of worship (HoW). With an intuitive touchscreen interface, simplified layout, and Zero Config (automatic setup) with JVC cameras. Consequently, the ability to create amazing broadcasts now is possible for anyone with any level of production experience. Even a volunteer or a novice producer can create and stream amazing content with ease. 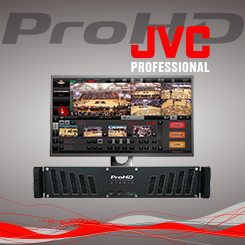 A better broadcast is a touch away. Designed for ease of use, the JVC ProHD Studio 4000 brings big features to a simple interface that anybody can operate. Live switching, streaming, and JVC camera control are easily accessed via a touchscreen interface. The ProHD Studio 4000 makes live video production easy and affordable. 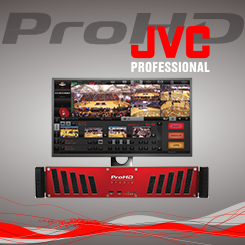 Take Your ProHD Studio “On the Go”

Take your ProHD Studio to any event, anywhere for live event broadcasts with ease. Housed in a rolling hard case, our “On the Go” (OtG) for ProHD Studio makes it easy and safe to transport your ProHD Studio directly to the action.The days of carrying a large fly pack or multiple cases now is over!

We include all of the necessities to get the most out your ProHD Studio, including the monitor. For this reason alone, simply pair the OtG for ProHD with your ProHD Studio system (or send us your unit for professional integration), and enjoy the convenience of having a complete production solution that goes anywhere.


*Professional integration by Stream Dudes available at an additional charge*

The JVC ProHD Studio 4000 & 4000s (with instant replay) are available now at Stream Dudes, so please Contact Us to learn more and have us design a custom workflow.

Headquartered in Wayne, New Jersey, JVC Professional Video is a division of JVCKENWOOD USA Corporation, a wholly-owned subsidiary of JVCKENWOOD Corporation. The company is a leading manufacturer and distributor of broadcast and professional video equipment, as well as D-ILA front projection systems. For more information, visit JVC’s website at http://pro.jvc.com or call (800) 582 5825.